Here’s a recent blog article by R. S. Martin titled Jim Shooter: A Second Opinion. It’s about Jim’s time as editor in chief of Marvel Comics. Jim thought it might be of interest to readers of the blog.

It’s a revised and expanded version of an article that was originally published at The Hooded Utilitarian on January 7, 2013.

JayJay here. Look! Up in the navigation bar!

I’ve created a separate web page section of the blog just for Jim’s storytelling lecture. It’s all of the information and images, without the fluff or announcements, in one easy-to-find spot. I thought it would be easier for people to to explore the content and browse only the information they want.

The wisdom of the ancients presented for your elucidation.

If anyone is interested, I’ll be at the following cons:

Eternal Con, Long Island, June 10-12 (I’ll probably be there only one day, don’t know which yet. Check their website.)

Denver Comic Con, June 18-19 (I think) I’ll also be  at the Mile High Comics Megastore at 4600 Jason Street around then. (Don’t know the dates and times.  Check with MHC)

END_OF_DOCUMENT_TOKEN_TO_BE_REPLACED

Here’s a recent YouTube interview filmed at the 2015 Florida Supercon with Supercon Mike where Jim talks about his past and some comic book industry history. He tells the story of the acquisition of the Gold Key characters for VALIANT, the early days of the direct market, the creation of GI Joe, Secret Wars and other stuff. -JayJay

Find out more information about Florida Supercon at www.floridasupercon.com

In 16 Stuff and Nonsense

It seems a Black Hole warped cyberspace and absorbed a lot of entries I posted long ago. They just vanished. However, the Amazing JayJay, Blog Elf Extraordinaire, has dragged them all out of oblivion. They’re ba-a-ack!

She can tell you what happened and how she fixed it if she wants. I prefer to believe it was Elf-magic.

The really annoying thing about the Black Hole was that it sucked up most of the How-to-Create-Comics posts!  The wisdom of the Ancients! Things I learned from Stan Lee, Mort Weisinger and a string of other all-time greats that I humbly passed along. The really, really annoying thing is that for more than a year, I’ve been referring people to posts that weren’t there anymore.

You see, after a long hiatus, I’ve been appearing at conventions again during the last year or so. Last year was the 30th anniversary of Marvel Super-Heroes Secret Wars, there was suddenly a lot of interest, so agent Spencer Beck organized a “reunion tour” featuring super-penciler Mike Zeck, star-inker John Beatty and what’s left of me.

END_OF_DOCUMENT_TOKEN_TO_BE_REPLACED

The first ever Stardoll graphic novel is on sale today. Available physically and electronically.

If you don’t know, Stardoll is, according to their website: “The world’s largest online fashion and dress up games community for girls!” It has 200 million users worldwide. It’s “paperdoll heaven.”

Even I knew that, and I’m decades older and the opposite sex from their target audience, which is “…girls who love fashion, making friends, shopping, decorating and being creative.” Hmm. Reminds me of a certain Blog Elf I know.

And if you’re wondering, no, I did not sign up. I do not have my own “MeDoll.” If I did, my lack of fashion sense would probably get me thrown offline.

END_OF_DOCUMENT_TOKEN_TO_BE_REPLACED

In 16 Stuff and Nonsense

To anyone reading this and all ships at sea,

Thanks for the mostly kind attention and support you graciously gave me back when I had time to blog. And, thank you to the justifiably cranky folks who chimed in when the occasion called for it.  Blogging was fun and I’ll do it again someday if I can ever get my ducks lined up.

The Year of Storms is almost over.  May next year bring comfort and joy for all.

Whatever your conception of the gestalt of existence, I mean this sincerely, to each in his or her own way: God bless us every one.

PS.  JayJay here. I’d like to add my holiday wishes to you all and thank you very much for everything!

JayJay here. I just wanted to let everyone know the Inkwell Awards annual ballot is live and voting is in effect now! From May 1 – May 15 at http://www.inkwellawards.com

Vote for your favorite inkers and vote for two of the industries most outstanding talents to win the Joe Sinnott lifetime achievement award!

The Dramatic Conclusion of the New Business Model Rant

Cory Doctorow sent me a couple of nice e-mails recently. He said he liked the last three posts, which discussed issues he raised about copyright, DRM and SOPA.You probably noticed from the dates on Cory’s articles and essays I cited (if you followed the links) that some were written a while ago. Cory said that he’s currently working on an updated, comprehensive book on the “big, synthesized whole” of intellectual property in the digital age. He sent me a sneak peek at the work in progress and gloriosky, it’s great. It’s not just for people in the biz or those fascinated by legal issues. Draconian digital copyright protection measures currently in use or being contemplated can affect ordinary, innocuous communications and be used in nefarious—make that really evilways—that never occurred to me. Some of the things Cory brings to light are deeply disturbing.

END_OF_DOCUMENT_TOKEN_TO_BE_REPLACED 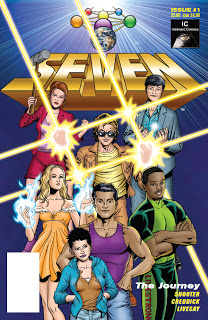 JayJay here. The VALIANT Collector’s Society asked me to make an announcement…

They have organized a special project of 100 Seven issue 1 comics signed by Jim Shooter, and several other creators who worked on the books, combined with a signed printout of issue 2, a CD with issue 2 in PDF format, a plot overview, character dossiers and much more extra stuff. And a COA from the VALIANT Collector’s Society.

This special package is a benefit to help support this blog and to finance the Unity 2000 project. I’m helping organize and finalize the project and I’m also working on coloring the unpublished Unity 2000 issues. It should be a very interesting and fun thing.

Here are the details for the Seven Project on the VCS forum:

I’ve got a list a few posts down on the forum of everyone who has signed up. Message me or email me if you have questions.

I did my first professional comics work at the age of thirteen, selling a Legion of Super-Heroes story to DC Comics and going on to write Superboy, The Legion of Super-Heroes, Superman and other titles. In 1978, I accepted the position of Editor in Chief of Marvel Comics under the condition that I would be allowed to improve things for Marvel’s creators. I introduced royalties and a spectrum of other incentives, rights and benefits, attracting a Who’s Who of talent. Later, I founded VALIANT, DEFIANT and Broadway Comics and was the principal creator of their characters and universes. Today, I’m the Editor in Chief of Illustrated Media, a custom comics company.